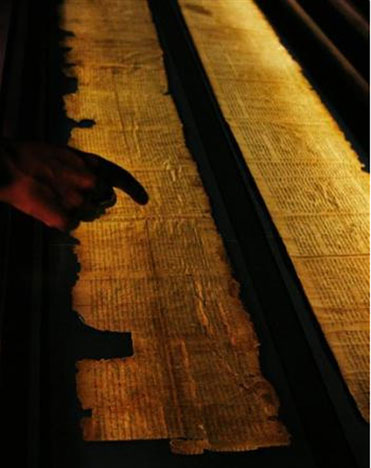 In the above picture (AP Photo/Tara Todras-Whitehil), an employee of the Israel Museum “points at the ‘Book of Isaiah’ from the Dead Sea scrolls at the Shrine of the Book in Jerusalem, Tuesday May 13, 2008.” This is one of the most important Dead Sea Scrolls and it goes on display in Jerusalem this week, “more than four decades after it was last seen by the public. The 24-foot scroll with the text of the Bible’s Book of Isaiah had been in a dark, temperature-controlled room at the Israel Museum since 1967. It went on display two years earlier, but curators replaced it with a facsimile after noticing new cracks in the calfskin parchment.” The article continues here (HT: Jim Davila).

This entry was posted on Wednesday, May 14th, 2008 at 9:52 pm and is filed under Hebrew Studies. You can follow any responses to this entry through the RSS 2.0 feed. You can leave a response, or trackback from your own site.