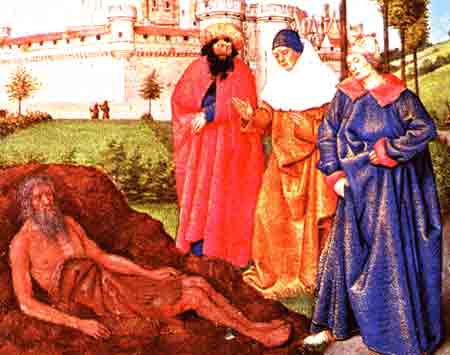 I am going to do a five-part series on the book of Job’s message for today. This is an update from a 2004 workshop that I did at the Mid-America Conference on Preaching. This initial post will serve as an introduction to the series. After this, I will do two posts on the message of Job, another on a structural outline of Job, and finally recommended themes with suggested units for an expositional series on Job.

I do not personally know of any pastor who has preached through Job in a verse-by-verse manner, though I suspect there may be a few who have tried. And, a verse-by-verse series on Job is not the expositional approach which I will support in this series. In reality, I have more commonly heard of sermons being preached about Job’s faith in his Redeemer in 19:25 or his unwavering faith after overwhelming tragedy in 1:6–2:10. Sermons on isolated texts tend to present Job as a man who esteems God above family, possessions, and health. With this understanding, the man Job is used as a model of “patience.” Yet, if we read beyond chapter two of Job and a few isolated verses, the picture of the patient Job is darkened. As a cursory reading of the entire book of Job reflects, the Joban author preserves a view of Job that may be construed as a “divided man.” Perhaps, this polarized view of the man Job contributes to a paucity of sermons on the book of Job. It is very rare to hear a message on chapter three of Job where he curses the day of his birth. Conceivably, this paucity is because Job in 3:1-26 reflects a wavering faith that is the antithesis of his faith in chapters one and two. Undoubtedly, the oversimplified picture of a “patient” Job is incorrect. The picture of Job becomes even more confusing in the heated three rounds of debate between Job and his three friends, Eliphaz, Bildad, and Zophar (4:1–27:23). One might misconstrue Job’s defense against his three friends as a proclamation of being “sinless.” At the minimum, he sounds like an extremely distressed believer. However, the picture of Job is even bleaker in Job 31. Job is so convinced of his innocence that he claims if possible he would wear on his shoulder an oath of his innocence and approach the Almighty “like a prince” (31:37). At this point, Job may sound like an unbeliever. As Job meditates on his great suffering, the Joban author presents him as something of a spiritual “schizophrenic.” To preach on the patient Job at the neglect of his impatience or on his positive affirmations of faith at the exclusion of his seemingly critical statements about divine justice is to distort the message of Job. Yet, it is the struggling Job who is a key figure in the development of the message of Job (Davis, “Preaching from Job,” Southwestern Journal of Theology 14 [Fall 1971]: 65). Does Job esteem God above his gifts? Or does he prize the gifts more than God? How does Job’s struggle relate to God’s sovereign control of the moral order of life?

Beyond the inability to integrate the struggling Job with the stalwart Job, it is difficult to understand how the book ties together as a whole. There is no evangelical consensus about the literary structure of Job or its essential argument. Furthermore, the Hebrew in this book is considered the most difficult in the Old Testament, with more than a hundred words that are used either once or twice in the Hebrew Old Testament. In addition, Job’s candid and constant questioning of divine justice is difficult to harmonize with God’s own estimation of Job: “a blameless and upright man, fearing God and turning away from evil” (1:8; 2:3). Job raises hard philosophical and theological issues to which God does not directly respond in the conclusion of the book (Parsons, “Guidelines for Understanding and Proclaiming the Book of Job,” Bibliotheca Sacra 151 [October–December 1994]: 393–94). These types of issues may be an impediment for understanding the Joban author’s argument and, consequently, encumber expositional preaching from Job. Habel has compared the difficulty in preaching on Job with a cactus garden: “Preaching from Job is like nurturing a cactus garden. One is liable to recoil from constant prickles and miss the blossoms in the night” (Job, p. 1).

While Job presents numerous difficulties, one facet of the book’s message is lucid: the intense nature of Job’s suffering. As a result of the clarity of this aspect of Job, many interpreters have understood that the message of the book of Job is primarily dealing with the subject of the righteous suffering. However, this approach is myopic for the suffering Job is neither told who was immediately responsible for his suffering nor the reason for his suffering (see Wilson, “Job,” in Theological Interpretation of the Old Testament, pp. 150-52). What then is the message of Job and how is his suffering integrated into this message? I will address the issue of the message of Job with my next two posts.