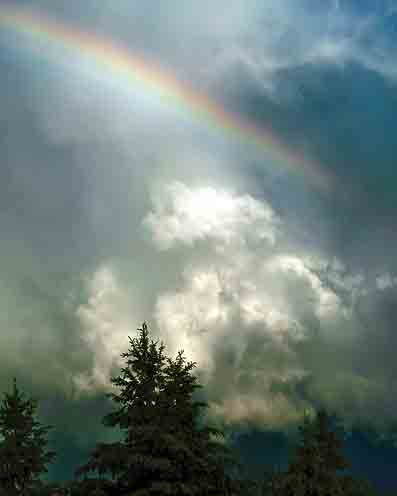 In my previous post, we looked at the misguided applications of God’s administration of justice. All the human participants, Job’s three friends, Elihu and Job had their own deficient interpretations about how God controls the moral order of the universe. The stage is set for God to speak ex cathedra. With this post, we will initially look at the divine interpretation of God’s administration of justice.

Rather than responding to Job’s demand for a legal hearing, God appears in a storm. Rather than discussing Job’s innocence or how He administers justice, God overwhelms Job with questions about His creation and management of the world. God says nothing directly about His control of the moral order of life as it relates to Job’s suffering and questions. God’s questioning of Job reflects that He, as the Creator and Sustainer of all creation, is working everything according to the wise perfections of His infinite design. Job must be content with recognizing that he cannot begin to fathom how God controls the details of the moral order of life and with his salvific knowledge of the Almighty. In both speeches the LORD challenges Job’s anthropocentric view of the moral order of life and substantiates a theocentric perspective. Each speech will briefly be presented.

God initiates this speech with an accusation against Job in 38:2. The point of this is that Job has darkened the LORD’s counsel with words spoken in ignorance. The LORD concludes this speech with the same type of accusation in 40:2 where He questions Job concerning the validity of his desire to legally contend with Him. God is reflecting with each accusation that Job does not comprehend His plan and work.

In demonstrating His accusation about Job’s lack of wisdom, God raises a series of rhetorical questions. These can be broken down in a threefold manner: God’s creation of the world in 38:4–11, His sustenance of the world in 38:12–38, and His management of the animal kingdom most of which were undomesticated in 38:39–39:30. The point of these is to demonstrate that Job is unable to comprehend what God is doing because he is not God’s equal. God in His freedom as an all-wise and all-powerful Sovereign had created and is sustaining His creation. This is a God-centered world in contrast to a man-centered view as advocated by Job in his ignorance as well as his fellow wise men.

Like the first speech, God makes another accusation in 40:8 against Job. With this accusation Job is accused of having discredited the LORD’s justice, condemning God to justify himself. As such, the LORD’s last speech does relate to His administration of justice; but it is not in the manner that either Job or his friends had expected. After this accusation, the LORD challenges Job in 40:9–14 to take over God’s place and to execute retributive justice on the wicked. God then returns to continue questioning Job in reference to His control of the animal kingdom. His questions focus on two of the wildest animals in Job’s day, behemoth and leviathan. God uses both creatures analogously to demonstrate to Job that His administration of justice is beyond Job’s comprehension.

The LORD challenges Job to look at behemoth (interpretations that I see as possible include a hippopotamus, an elephant or a dinosaur) in 40:15–24. The point is that Job himself could not readily control behemoth. God reminds Job in the middle of the speech, v. 19, that He has behemoth completely under His control. God concludes this speech with a challenge in v. 24 reminding Job of his inability to subdue behemoth. When we compare v. 24 with v. 19, God is stressing that Job was unable to capture behemoth (v. 24), yet God has him completely under His control (v. 19). We should compare these two verses with vv. 8–14. If Job cannot govern behemoth, how could he hope to humiliate all the proud ones of this earth (vv. 11–14)? If he can do neither, how can he question God’s administration of justice (vv. 8–9)? Thus Job should forget his request for vindication and completely submit to the LORD and His control of this world.

The LORD challenges Job to subdue leviathan (possible interpretations include a crocodile or dinosaur) in 41:1–34. God reminds Job in v. 10 that he was not fierce enough to arouse leviathan and, therefore, how could he hope to come before God with His claim. This is developed further in v. 11 where God highlights that He owns everything. Because of this, God does not have to respond to any created being’s claim against Him. In vv. 33–34 God brings this speech to a conclusion. Using personification, God describes leviathan as a unique creature. As such leviathan had no equal on earth. Being fearless, no creature could intimidate leviathan, v. 33. God further describes leviathan in v. 34 as looking down on all other creatures. As such, he is king over all the haughty including Job since Job could not approach him with a bridle (41:5). The a fortiori argument is this, if leviathan is king over all the proud including Job, how much more so is his Creator, the Sovereign Lord of the universe.

If Job is unable to capture or control either behemoth or leviathan, then how could he hope to take God’s place in administering justice? God never tells Job how he exercises justice. This was impossible since God’s control of the moral order of this life was beyond Job’s creaturely comprehension. The LORD’s administration of justice is beyond any created being’s understanding. Though Job does not have the issue of justice explained, he does learn that this is too profound for him and that he must submit to the Sovereign God who administers justice in perfect conformity with His nature and plan.

What then is the overall message of the book of Job? I would summarize it like this. Because of God’s incomprehensible wisdom and incomparable power as reflected by His creating and sustaining the world and its inhabitants, He is its sovereign who freely administers justice correctly. With Job’s fuller revelation of the theocentric nature of the world, he repented of his wrong and fearfully submitted to the Almighty. In short, the mysterious nature of God’s control of life’s moral order should produce in his people a repentant faith in God and a wholehearted reverence for his sovereign majesty.

With my next post, I will develop a structural scheme for Job with annotated outline.