How Important Are Family Values in the US? 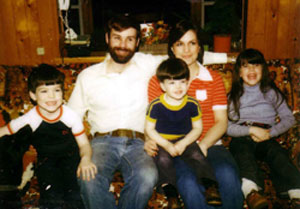 I had completely forgotten the above picture until it somehow surfaced at my son Bob’s wedding in 1999. This picture brings back many fond memories. In the spring semester of 1981 while I was doing my ThD work at Grace Theological Seminary, I dropped out of school for a semester because my wife needed surgery. We were as poor as church mice and had only one inefficient car. As a consequence, I would walk about a mile to work in the early hours of the morning. Because of the cold northern Indiana winters, I grew the beard to protect my face from the cold. Though life was tough, this was a great time for our family for life did not have an excessive number of embellishments. In its simplest form, life was about the family getting dad through school. What had great importance for my wife and I was raising our children in the nurture and admonition of the Lord. As I have watched family values in the US quickly erode over the last fifteen to twenty years, a Barack Obama presidency may cause this erosion to be complete.

I use the above picture because it reminds me about the importance of my family. Since I live in Michigan, a blue state, I know Christians who are “purgatory”-bent on voting Democrat (btw, I do not believe in purgatory, it is my substitute rhetorical device), even though the party values of the Democrats are biblically bankrupt. To be sure, I am repulsed by the scandals of a few Republicans; however, believers must vote for the basic platform of a political party that best preserves the Judaeo-Christian ethic our forefathers intended for the US. This is one election that I pray that my Democrat Christian friends reconsider how they vote. Some may say, I see how liberal Obama is so I will not vote. This would be disastrous because to not vote is to vote for Obama (another undesirable alternative would be to vote for a third party candidate, since it is likewise a vote for Obama). Furthermore, how could a genuine Christian even entertain the thought of voting for Barack Obama for president? Not only does he have one of the most liberal voting records in the Senate, but his commitment to appoint activist judges may ruin the core values of the United States. Though he has more problems than two I have mentioned, what currently grieves me is a report that I read last night by Michael Farris where he maintains that Obama approves of the formal sanction of the UN Convention on the Rights of the Child. In his own words, “Obama supports the ratification of the UN Convention on the Rights of the Child, a treaty that would have disastrous consequences for the American family. This treaty would be, according to our Constitution, part of the Supreme law of the land. And in the U.S. international treaties override state law.” You need to read the full article by Farris: “Obama Knows Best: Elitism Threatens Parental Rights.”

This entry was posted on Wednesday, May 14th, 2008 at 8:31 am and is filed under General Interest. You can follow any responses to this entry through the RSS 2.0 feed. You can leave a response, or trackback from your own site.