As an outgrowth of my own recent two-part study of the framework hypothesis in volumes 10 (2005) and 11 (2006) of the Detroit Baptist Seminary Journal, I have observed that this view of cosmogony is rapidly growing in popularity among evangelical educators and students in the western world. An article recently posted at Creation on the Web makes this very point. “The ???framework hypothesis??? is probably the favourite view among respectability-craving seminaries that say they accept biblical authority but not six ordinary days of creation.”

Authors Drs. Don Batten, David Catchpoole, Jonathan D. Sarfati, and Carl Wielande provide a reason for the current popularity of this myopic interpretation of the creation account: “It is strange, if the literary framework were the true meaning of the text, that no-one interpreted Genesis this way until Arie Noordtzij in 1924. Actually it???s not so strange, because the leading framework exponents, Meredith Kline and Henri Blocher, admitted that their rationale for this bizarre, novel interpretation was a desperation to fit the Bible into the alleged ???facts??? of science.”

“Believe it or not, methods to ???date??? the earth as being very old just don???t add up. For a start, the various methods contradict one another, and are often contradicted by the evidence itself.” As Tas Walker continues, “ten-year-old rock from a volcanic lava flow on Mount St Helens, USA, gave a radiometric age of 350,000 years. Minerals from the same samples gave an age of 2.8 million years.”

Whatever else may be said about the evidence from Mount St. Helens, the observable information clearly dates the volcanic rock as ten years old. An apparent problem for this type of evidence is that it is incompatible with the reigning view about cosmogony in Western cultures, which estimates the age of the earth to be billions of years. According to this hypothesis, an old earth is coordinate with conventional scientific thought. However, Walker provides other geological evidence suggesting that the evidence drawn upon to support an old earth cannot be consistently used to maintain this hypothesis. After presenting some geological evidence that contradicts an old earth, Walker maintains that “scientists cannot measure the age of the earth directly but base their estimate on how they imagine the world formed.” To consider some of this evidence, read his article “Believe it or not???the earth is young“

“One of the most conspicuous obsessions in our culture is the quest for physical beauty. Concern about what we look like pervades our social relationships and seduces us all, men and women both, to some degree or other. The typical impact of culture is like the effects of air pollution: what you inhale tends to slowly and steadily alter you. Our culture besieges us with voices that comment on what we look like, what we ought to look like, and the blessings and curses that presumably attend success or failure. Our mass media culture silently beguiles us with images of the same,” as David Powlison begins his insightful article.

One of the great seductive forces of American culture is that “image is everything.” Regretfully, American Christians are often influenced by the values of the world rather than doctrinal purity and the fruit of the Spirit. Powlison’s article is a must read for all of us who are evenly subtly influenced by our culture’s obsession with physical beauty. Go to “Your Looks: What the Voices Say and the Images Portray.” 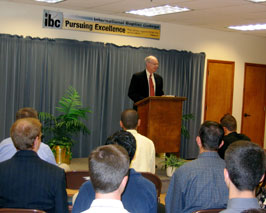 I only have a few days left to enjoy our Thanksgiving vacation. My wife and I have spent most of this time in Glendale, AZ visiting my son, Bob, and his family along with my youngest son, Joshua, and his wife, Krysten. While on this trip, I have visited Southeast Valley Baptist Church, pastored by DBTS alumnus Joel Tetreau, in Gilbert, AZ and Tri-City Baptist Church in Tempe, AZ. I also had the privilege of visiting International Baptist College, a ministry Tri-City Baptist. My visit to International Baptist College provided me the opportunity to interact with Dr. Michael Sproul (Pastor of Tri-City Baptist Church and Chairman of IBC’s Board of Trustees), Dr. Jerry Tetreau (Chancellor), and Professor Michael Riley (Acting Academic Dean and Dean of Men), to mention a few of the good people at IBC. Since Michael had been one of my students at DBTS, it was an additional blessing to interact with him about life at IBC and his doctoral work at Westminster Theological Seminary. The picture above was taken of me when I spoke in IBC’s chapel on Wednesday morning, November 21. I preached on Psalm 19:1-6 and connected it with three lessons from Romans 1:18-25. The thesis of my message was that the works of God indisputably declare his glory to all people. Speaking at IBC was one of the many highlights from my trip. 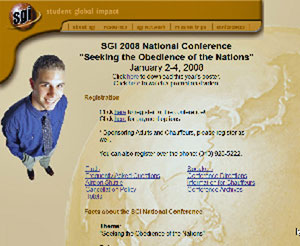 The SGI National Conference, a ministry of Inter-City Baptist Church in Allen Park, MI, is a conference that seeks to enlarge students??? vision of the cause of missions. The 2008 conference will be hosted at Inter-City Baptist Church. The theme for this conference is “seeking the obedience of the nations.” For a brief introduction to the this conference by Dr. Mark Minnick, click on the SGI video. After looking at the video, check out information on the conference at Student Global Impact and make plans to attend.

Answers in Genesis’s weekly News to Note, November 10, 2007 calls attention to a BBC report from November 7: “Man kills eight at Finnish school.” According to the BBC news, eighteen-year-old Pekka-Eric Auvinen killed eight people and wounded at least ten others at a high school in southern Finland. Next, the gunman shot himself in the head and subsequently died in a hospital as a result of his wounds. Describing himself as a “social Darwinist” in a video he had posted at YouTube (which subsequently was removed), Auvinen had determined to eliminate all those who did not meet his criteria of fitness. AIG’s News to Note observes that Auvinen’s Darwinist presuppositions seem to have provided a justification for this massacre. For a more thorough elaboration on this tragedy’s linkage with Darwinism, read Brodie Hodge’s biblically informed article “Finland School Shootings: The Sad Evolution Connection.” Check out this brief article and follow the links in it(Via .)

I have heard and listened to a number of sources defending global warming as one of the great evils created by modern man. As I have had the opportunity, I have raised questions about this and have noted that global warming seems to be more about politics than substantive facts. Earlier today, I was intrigued to read that global warming, according to John Coleman, founder of the Weather Channel, “is the greatest scam in history.” Check out “Weather Channel Founder: Global Warming ???Greatest Scam in History’.”

On my October 31 post, “Praise God for Fundamentalists: Desiring God Blog,” I drew your attention to Dr. John Piper’s post “Praise God for Fundamentalists.” In this short article, he expresses his appreciation for the 2005 FBF resolution “On the Ministry of John Piper.” In my opinion, Dr. Piper’s brief article is worth noting on three accounts. First, Piper notes that the FBF’s resolution accurately reflects a few areas where there is disagreement. Second, Piper has some sense of respect for fundamentalism. As a fundamentalist, I have occasionally been disappointed because it seems that we are at times ignored as something of a “lunatic fringe.” In this regard, Piper’s article was refreshing to read. Third, Dr. Piper’s article reflects a humility that we should strive to have when appropriately criticized.

Though I am not a member of the FBF and am unfamiliar with many of their other resolutions, I had read this one with great interest because I understood that one of DBTS’s graduates, Michael Riley (currently completing a PhD in apologetics at Westminster Theological Seminary and Acting Academic Dean at International Baptist College in Tempe, AZ), had written a foundational article prior to the FBF meeting entitled “On the Ministry of John Piper.” This article became the basis for the FBF’s 2005 resolution and was printed in the July/August 2005 edition of FrontLine magazine (for a presentation of the some of the criticisms to Professor Riley’s article along with his responses, see his blog). When I initially read this FBF resolution and after reading it again a few days back, I am convinced that FBF resolution was accurate and well-written. It praised Dr. Piper’s theological orthodoxy and overall ministry in stressing a God-centered view of salvation and life. In addition, it stated a few areas where the FBF disagreed with Piper. In my estimation, the FBF resolution hit a bull’s eye.

The point of this post is to call your attention to an October 31 post by Michael Riley. This post contains a letter that he wrote to Dr. Piper. The significance of his letter is that it provides some personal background to his foundational article for the 2005 FBF resolution; and it, at the same time, reflects a healthy appreciation for the contribution that Piper’s writing ministry has made in the theological development of Michael Riley, as well as many other young fundamentalists. It is well worth your time to read his letter.