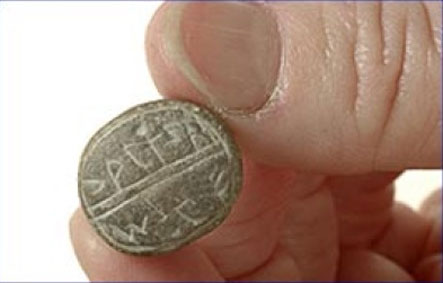 As you look at the above seal, the name “Rephaihu???Shalem” is written in Palaeo-Hebrew. This script goes back to the days of Moses. Yesterday, Israel Ministry of Foreign Affairs posted a brief article about the finding of seals, which included the one above, in the City of David that dated to the 8th century. “Finds recovered from the excavations in the City of David reveal an interesting development in the ancient world: whereas during the 9th century BCE letters and goods were dispatched on behalf of their senders without names, by the 8th century BCE the clerks and merchants had already begun to add their names to the seals.” Check out 8th Century BCE seals found at City of David excavations 27-Feb-2008 (HT: Jim Davila). 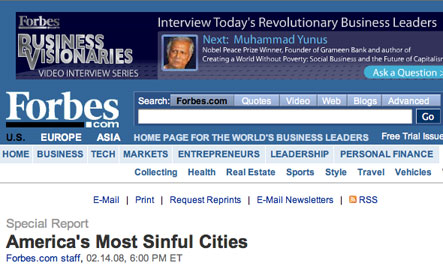 The recent focus of many people living in the Detroit area has been on the Detroit mayor’s text message scandal (for more information about his struggles, click here and here). The current scandal has its roots in the Whistleblower Trial of 2003.

Unfortunately, this type of scandal further tarnishes the image of Detroit. However, what is even worse than this scandal is Detroit’s perpetual infamy as the “Murder Capital” of the United States. This unfortunate reputation has surfaced again in a special report that is posted at Forbes.com, “America’s Most Sinful Cities” (HT: Al Mohler’s blog). It was stated in this article that “we have unveiled the American city that has fallen the farthest from grace in each of the seven deadly sins ( lust, gluttony, avarice, sloth, wrath, envy and pride). For each sin we stretched our imagination to find a workable proxy–murder rates for wrath, per capita billionaires for avarice–then culled the available data sources to rank the cities. Some of the results were surprising: Salt Lake City as America’s Vainest City. Some were not: Detroit as America’s Most Murderous.” This last line is the picture that the world apparently has of Detroit. A few months earlier David M. Ewalt wrote an article on November 11, 2007 entitled “America’s Most Murderous Cities.” In this article, Detroit ranked no. 1 as compared with Baltimore as no. 2. In the words of Ewalt, “To put it in perspective: Detroit’s murder rate is more than 8% higher than the country’s second most murderous city, Baltimore, and eight times that of the least murderous metro. More people were murdered in Detroit than in San Antonio, San Diego, Dallas and San Jose combined–and each one of those cities has a bigger population than Detroit.”

Ewalt’s description of Detroit is distressing. It is bad news for Detroit to have the ignominy of being labeled as “America’s Most Murderous City.” The current text message scandal only adds to Detroit’s ongoing dubious distinction among cities in the United States. However, the Detroit area has some positive distinctions, such as the Detroit Symphony Orchestra and The Henry Ford,” to name a few. In my estimation, what is more important for any godly influence in the Detroit area are those churches committed to a clear proclamation of the Gospel message that demands sinners to repent and believe in the Lord Jesus Christ. There are a a number of historic fundamentalist and conservative evangelical churches in the Detroit area. Though there are a number of good churches, let me name two larger fundamentalist churches that I am very familiar with and can positively promote: Inter-City Baptist Church and First Baptist of Troy. Though life in the Detroit area has significant problems, my prayer is that not only Inter-City Baptist and First Baptist of Troy but all the churches committed to a gospel proclamation of Christ’s lordship will serve as salt in an area that desperately needs this message coupled with the regenerating work of the Spirit.

Just in case any of you might have missed the significance of February 8-12, February 8-10 was “Evolution Weekend,” February 10 “Evolution Sunday” and February 12 “Darwin Day.” For the past two years some educators and clergy have set aside these days to celebrate the significance of Darwin’s influence on the world. Some of this as well as a few references in opposition to it is pointed out in Alan Boyle’s article at msnbc.com “Evolution Goes to Church” (for beneficial reactions against “Evolution Sunday,” click here and here). In his blog entry yesterday, Dr. Albert Mohler states an irreconcilable difference between evolutionary thought and biblical theism: “The dominant theory of evolution — the theory as taught and defended by the world’s leading evolutionary scientists — explicitly rules out any supernatural design or interference at any point in the evolutionary continuum. That fact alone makes the theory incompatible with any legitimate affirmation of divine creation or of biblical theism.” For his entire post, check out his helpful article “Two Irreconcilable Worldviews.”

How far will Great Britain go in allowing Muslims to change Britain’s law? As Al Mohler notes: “For the past two or three decades, Britain has been engaged in a radical experiment in abandoning its own national identity. It has encouraged a huge number of Islamic immigrants to enter the country. This explains why some of the most extreme sects of Islam have taken root on British soil. Just a few weeks ago, another senior cleric warned that some areas of Britain’s cities has become ‘no go’ zones for non-Muslims. Any casual visitor to some British cities will know exactly what he means.” Do not miss reading Al Mohler’s “Sharia Law in Great Britain?” Does this have implications for the United States?

Should we be concerned about global warming or global cooling? Check out John Hinderaker‘s “Global Cooling Alert“: “When Scott and I wrote “The Global Warming Hoax” in 1992, a group of Danish scientists had just published a paper that compared solar energy output (as measured by sunspot activity) to global temperatures, and found a striking correlation. No surprise there: just about all energy on earth comes from the Sun. Investors’ Business Daily recalls that research and notes that the Sun has been quiet lately.”

With Governor Mitt Romney’s departure from the Republican presidential race earlier this week, Senator John McCain should be the 2008 Republican Presidential candidate. Yesterday, the extremely influential evangelical leader, James Dobson of Focus on the Family, came out in support of Mike Huckabee. Since I have been supportive of Governor Romney, I am disappointed that he is gone from the race. However, after Super Tuesday, it is clear that he could not win the nomination, and neither can Huckabee, with whose basic moral values I agree. However, it is time to stop whining and face political reality. In my opinion, Dr. Dobson’s endorsement of Huckabee misses the political forest for the trees. To put Dr. Dobson’s endorsement into a fuller political and moral context, check out today’s Editorial Page of The Wall Street Journal: “Dobson’s Choice.”

We began our Spring Semester on January 21 at Detroit Baptist Theological Seminary. Before the semester advances too far, I wanted to post a few pictures from my classes. At this point in the semester, the students generally look wide awake, though this will quickly change.

The first group picture is of my Old Testament Poetic Books’ class. As the group was preparing to take a short recess, I took a picture of them in the back of our classroom. At this point, they may be thinking what have I gotten myself into. 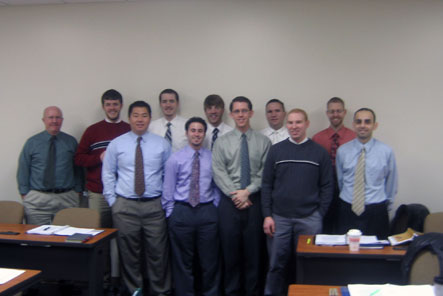 END_OF_DOCUMENT_TOKEN_TO_BE_REPLACED

As the media and many politicians continue to prophesy about our impending destruction if we do not repent of our environmental sins, is it possible that we have not been given a balanced view? For a look at another perspective on this issue, you might want to peruse CO2 Science. Today, I found a review of Dr. Craig Loehle‘s “A 2000-year Global Temperature Reconstruction Based on Non-treering Proxies,” 18 (2007): 1049-58. This abbreviated article summarizes Dr. Loehle’s more detailed work. Though this article is brief, it should stimulate our thinking so you do not want to miss reading “A Global Temperature History of the Past Two Millennia.” 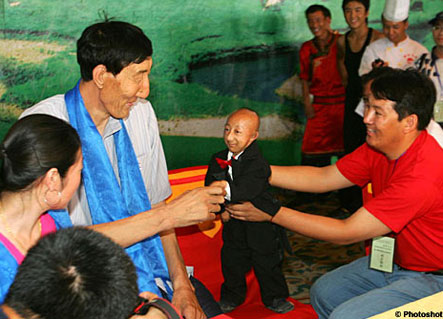 The above picture of the tallest man meeting the smallest is taken from Living in the Whine Country.

Can skeletal and behavioral evidence be used to prove that the Hobbit, Homo floresiensis, is not fully human? In Reasons to Believe’s volume 9, number 4 2007 edition of Connections, Dr. Fazale Rana of Reasons to Believe uses this type of evidence to argue that the Hobbit was not fully human. In this open letter, recent creationist writer Ryan Jaroncyk challenges Dr. Rana’s argument. Ryan Jaroncyk’s letter is a respectful and well-documented response. To read this response, go to An open letter to old-earth creationist, Dr. Fuz Rana.