??Last week Dr. R. C. Sproul conducted an interesting interview with Ben Stein about his soon-to-be-releasted film “Expelled: No Intelligence Allowed” (for a short clip of this film, click this link). Earlier this morning, I listened to a two-part audio presentation of this same interview.

Based upon some of my research about this documentary film, the point of it is to expose the rampant prejudice in the place of supposed academic freedom, the government-funded university. Though public universities claim that professors and students are free to follow scientific evidence to its logical conclusion, the hypocrisy of this claim in many university settings is that advocates of Intelligent Design are being persecuted for their belief that there is irrefutable scientific evidence that can only be explained by an Intelligent Designer rather than with an evolutionary hypothesis. Though in my estimation the Intelligent Design view is inadequate for explaining the Genesis account of creation, I am convinced that any government-funded university’s denial of its professors or students’ academic liberty in science undermines that school’s credibility in claiming academic freedom and freedom of speech. Further, from an apologetic perspective, Intelligent Design can be used to show an unbelieving evolutionist that the presuppositions of his worldview cannot account for reality in science, as well as logic and morality, and that the presuppositions of Christian theism offers a biblically informed explanation. If a believer can convince a Darwinist about his inconsistent worldview, he is in a position to present the gospel message with its demands for repentance and faith in Jesus Christ (for a theologically informed review of Intelligent Design advocate Michael Behe’s Darwin’s Black Box, download Brian Jones’ Review of Darwin’s Black Box).

Because of the significance of this interview, let me encourage you to check it out. You can access the interview either by watching a video or listening to the same interview broken up into a two-part audio presentation. To access the video, go to Ligonier’s blog entry “R. C. Sproul Interviews Ben Stein” and scroll down to the video. To access the two-part audio, you can initially click “Interview (Pt. 1) Expelled (the Movie) and Intelligent Design” and then “Interview (Pt. 2) Expelled (the Movie) and Intelligent Design.” I am confident that you will find the interview worthwhile.

Creation on the Web posted a brief interview that Drs. Don Batten and Jonathan Sarfati conducted with Dr. Don Johnson, a retired research scientist and professor with a Ph.D. in Analytical Chemistry and a second one in Computer Science.

In this interview Dr. Johnson explains “that evolutionists have an impossible problem explaining the origin of the information in living things: ‘Information cannot arise by chance, no matter how long you have. It just can???t.'” Though brief, you do not want to miss reading “Double Doctor Doubts Darwinian Dogma.”

This past Wednesday, March 19, Detroit Baptist Theological Seminary had its 2008 William R. Rice Lecture Series. This year we were privileged to have Dr. Andrew David Naselli lecture on “Keswick Theology.” Andy is currently pursuing his second PhD at Trinity Evangelical Divinity School in Theological Studies with an emphasis in New Testament Exegesis and Theology. This year’s lecture at DBTS is an outgrowth of his 2006 PhD dissertation from Bob Jones University’s seminary: “Keswick Theology: A Historical and Theological Survey and Analysis of the Doctrine of Sanctification in the Early Keswick Movement, 1875???1920” (see the 2006 entry on his website’s publication page).The thesis of Andy’s lecture is that Keswick theology’s view of sanctification is theologically erroneous (a thesis that DBTS has been supporting for some time). His lecture has three sections. Part 1 involves a historical and theological survey of the early Keswick Movement from 1875 to 1920 His second and third sessions present a theological analysis of Keswick Theology. His historical research and theological analysis reflect the type of biblical scholarship that serves as a good example to those in attendance at this year’s lecture. To obtain his material, place your cursor on handout and power point presentation. To listen to the three sessions of his lecture, click here, here and here. In addition to the material from Andy’s DBTS lecture, I would also recommend that you regularly consult his excellent blog.

Advocates of non-literal interpretations of Genesis 1 often support their position by contending that the first three days of the creation week could not have been literal since it is impossible to have a literal evening and morning without the presence of the Sun, which was not created until Day 4. In his brief article opposing a figurative understanding of the creation days, Andrew S. Kulikovsky explains that God created a temporary light source to separate “light” from “darkness” on the first three days of creation and provides a contextual argument that “the term ???evening??? refers to the beginning of the period when God was inactive, and the term ???morning??? refers to the termination of God???s inactivity and the beginning of the next day???s work.” With this contextual argument “the occurrence of evenings and mornings before the creation of the Sun on Day 4 provides no reason to doubt the truth of Scripture in general and the Creation account in particular.” Check out his helpful article “Evenings and Mornings.” 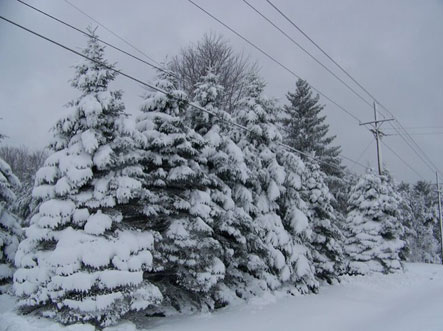 As many of you who read my blog already know, I am a little cynical about global warming (see “Polar Bear Update and Alaska’s Concerns“). However, my cynicism has increased based upon the 8 to 10 inches of snow that I woke up to this morning (see “March Winter Storm“). It has been many winters since I have seen this much snow linger in Allen Park, Michigan. In reference to the severity of this winter in certain parts of the northern hemisphere, Noel Shepherd, a contributing editor to NewsBusters, correctly notes that “in fact, all kinds of cold and snow-related records are occurring all over the supposedly warming planet this winter despite continued claims by climate alarmists that the world will come to an end if we all don’t immediately reduce our emissions of that awful — naturally occurring and necessary for most life on earth! — gas, carbon dioxide.” Since global warming has become something of a religion in the US, I wonder if our “objective” media is going to either ignore or spin the facts of this winter. Sheppard addresses this type of issue and more (while also noting that snow has returned to Mt. Kilimanjaro, in East Africa). Do not miss reading “Will Media Ignore Harsh Winter of 2008 to Preserve Global Warming Myth?“